As I promised in an earlier post, here’s a set of photos of my test work on painting Dwarf Brewers. I ordered about twenty of these miniatures via Amazon, and I believe those orders had to be distributed among several different game stores. If those stores wondered what one person wanted with all those Dwarves, this post will show you.

I should acknowledge that there are better comparisons between the different colors of Citadel Contrast Paints; here’s my favorite. But I felt I needed to see the results in real life, painted in the way I’ll apply the colors to my own miniatures.

As a reminder, these are base zenithal primes over which I applied the contrast paints. (Also: The next planet I create for a science-fiction setting will be named “Zenithal Prime”.)

On the left is tan zenithal, on the right is gray zenithal.

First, the autumnal colors that I painted over tan zenithal. 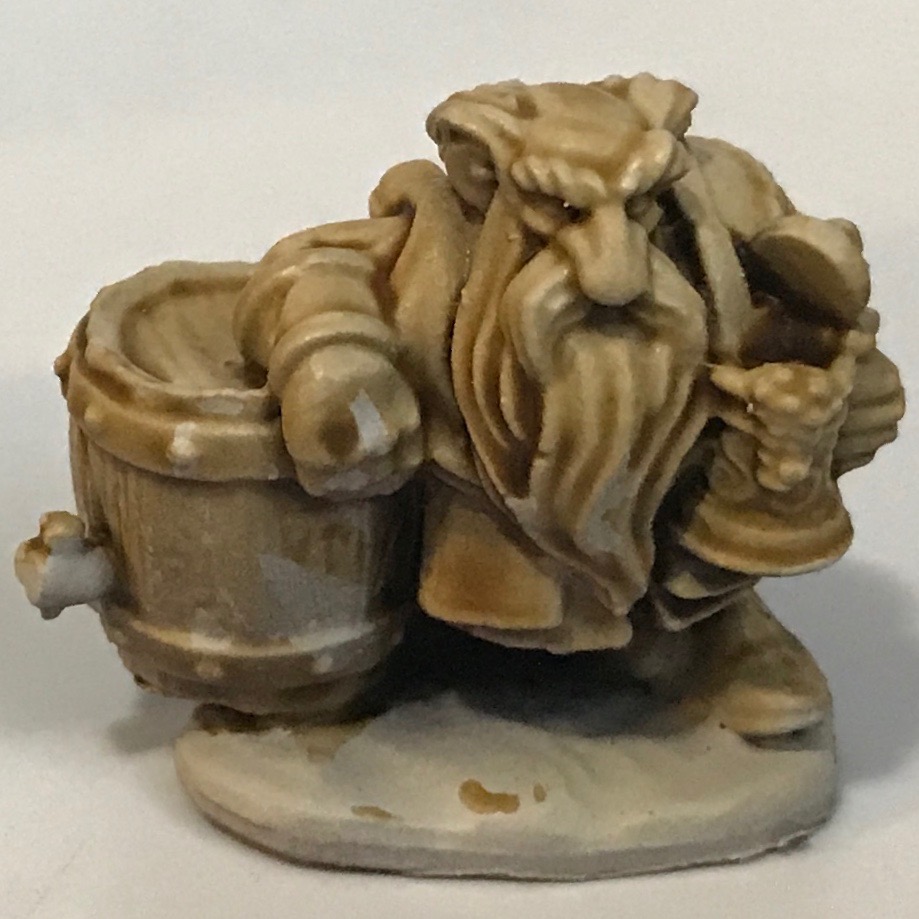 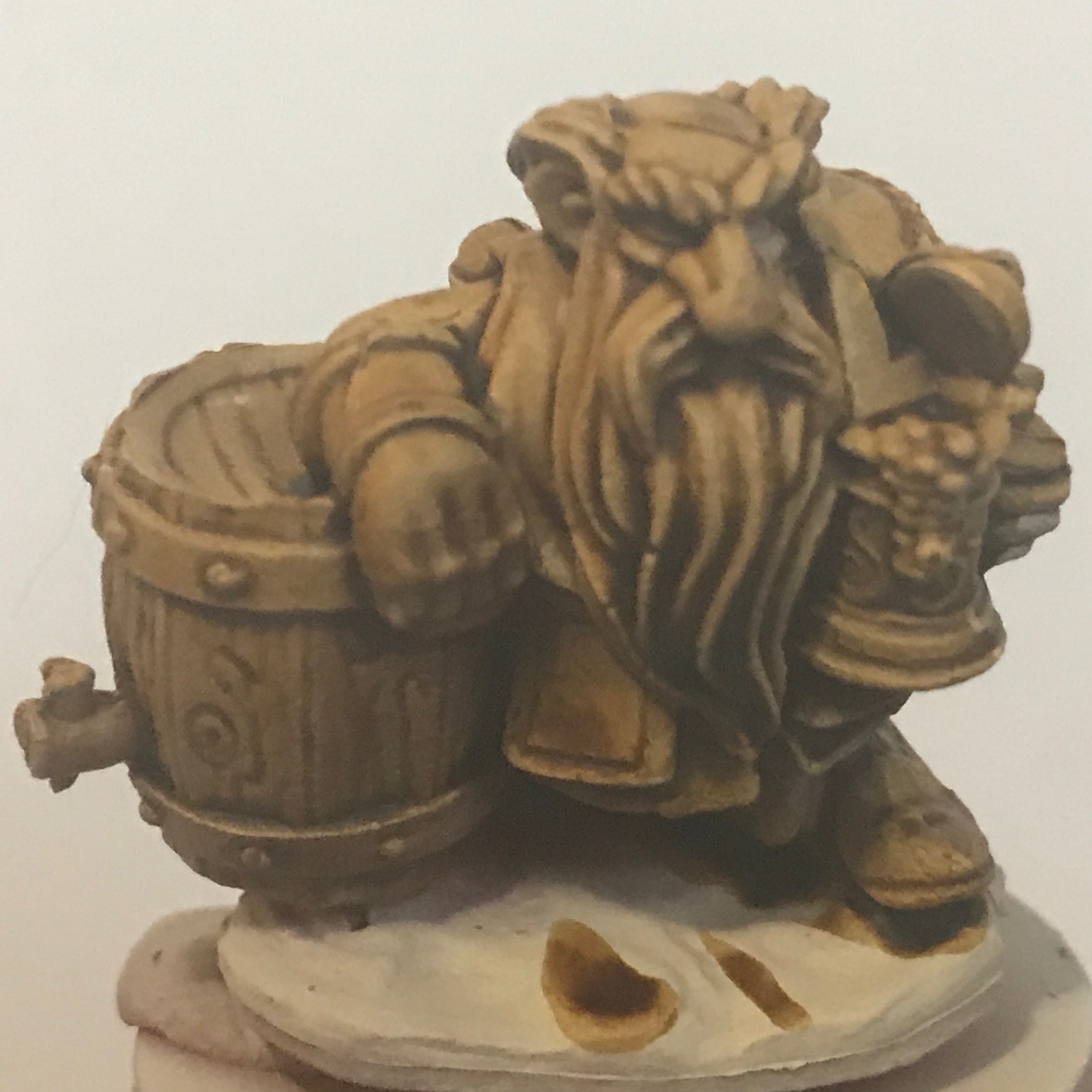 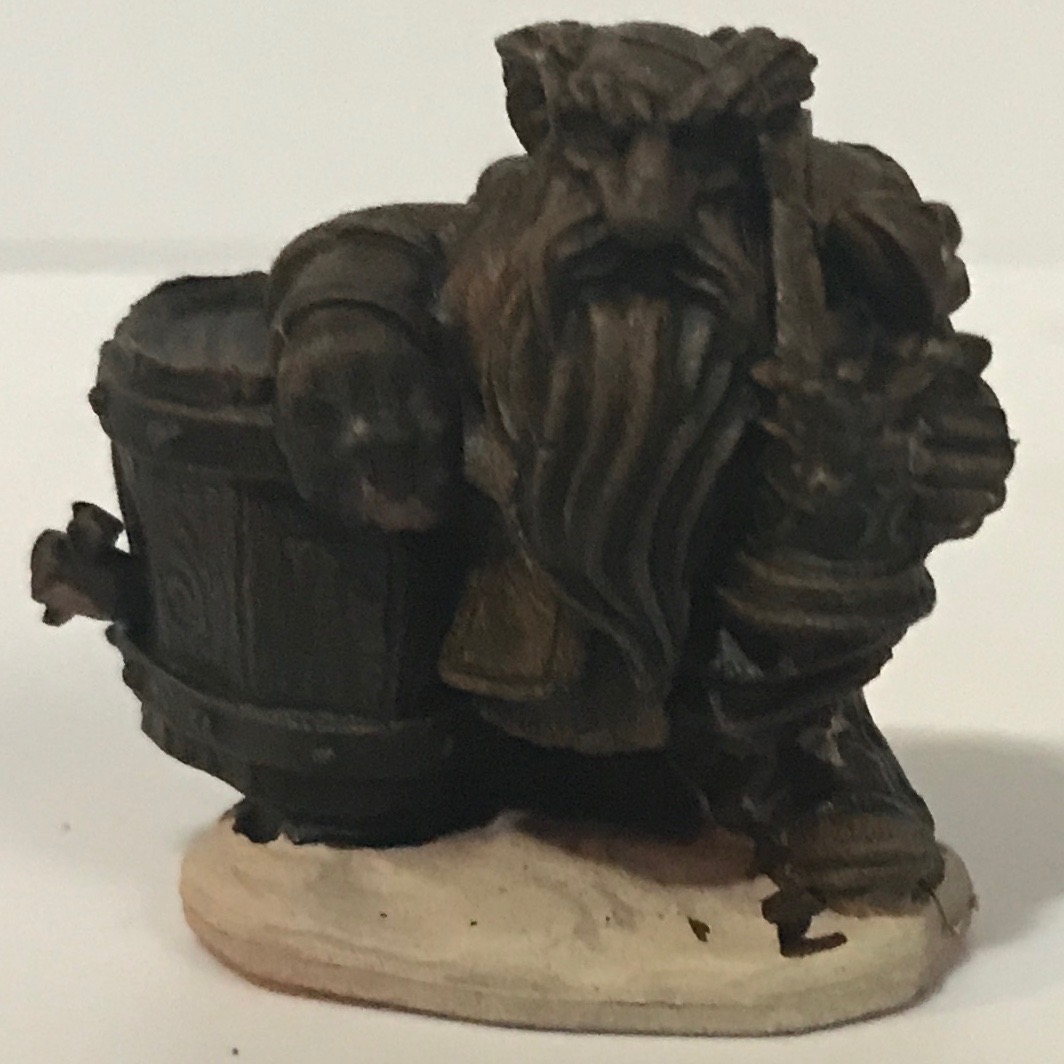 Next, the colors I painted over gray zenithal. 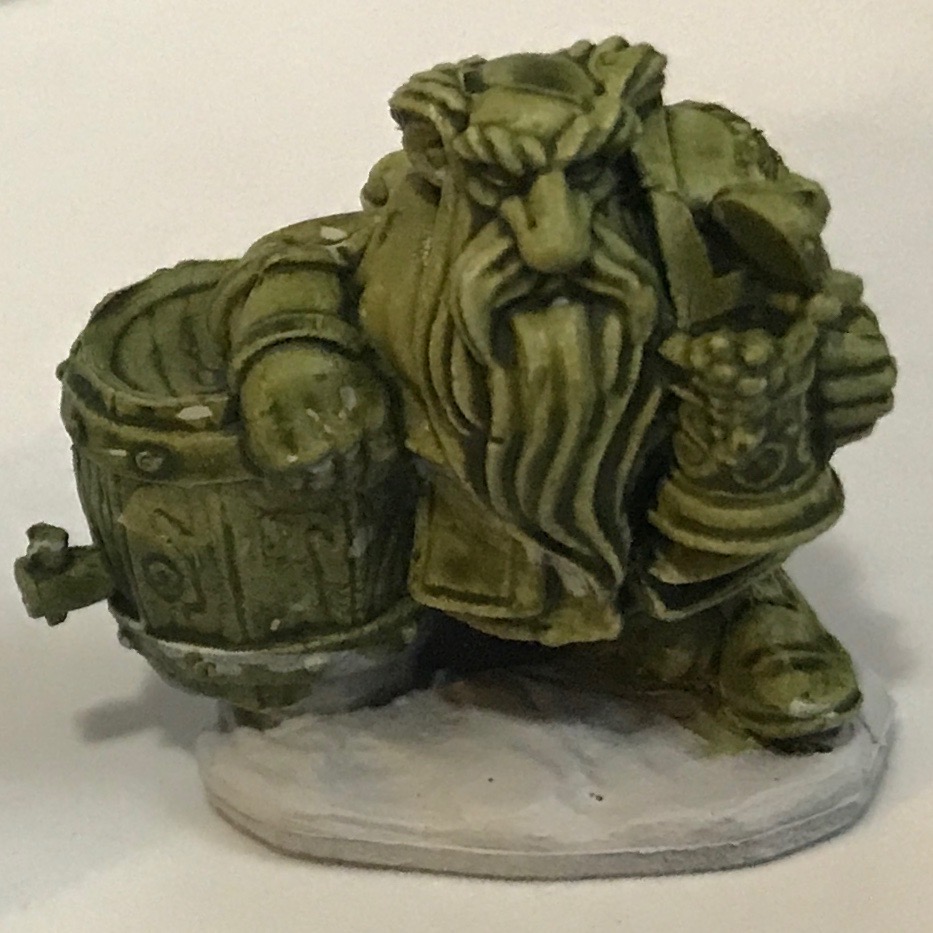 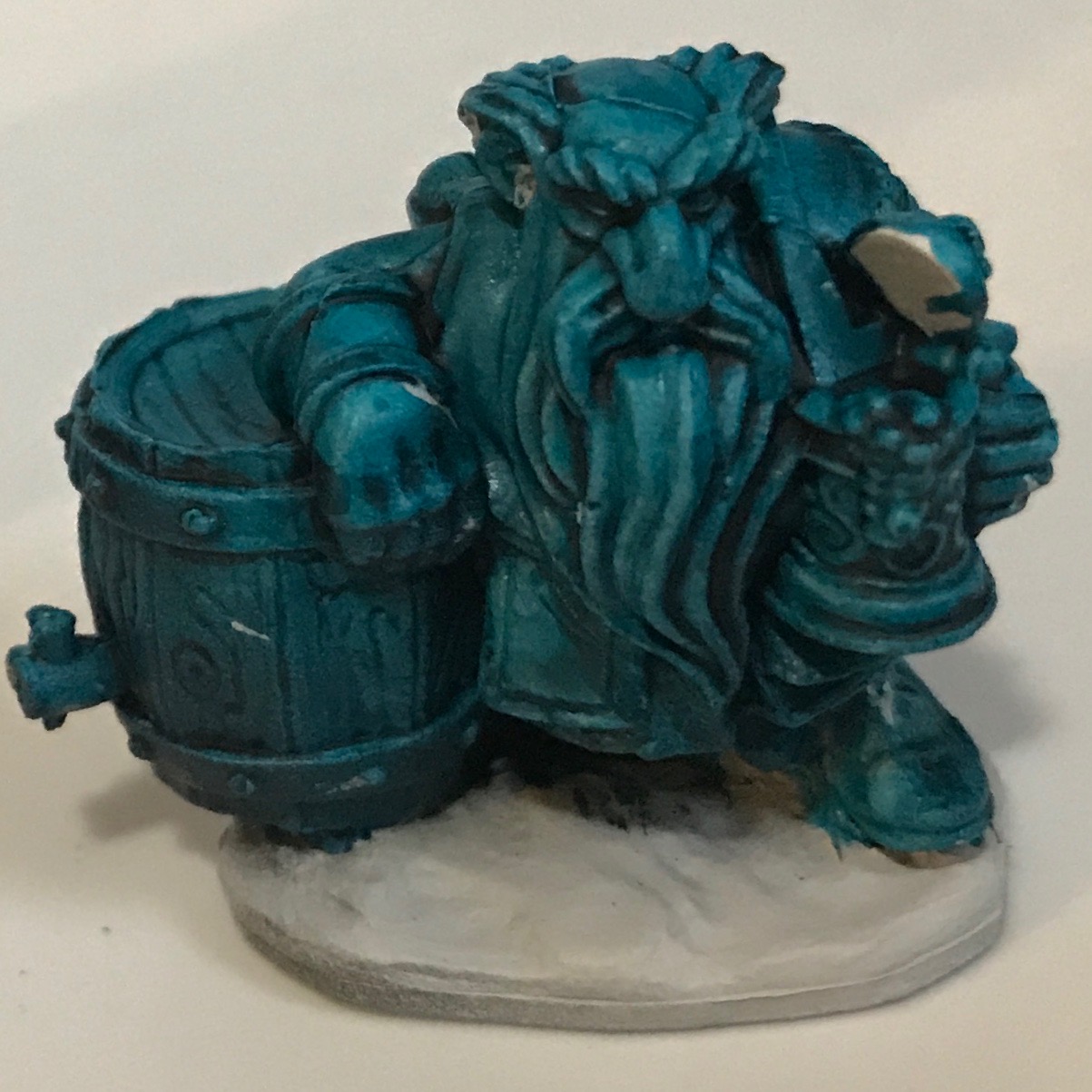 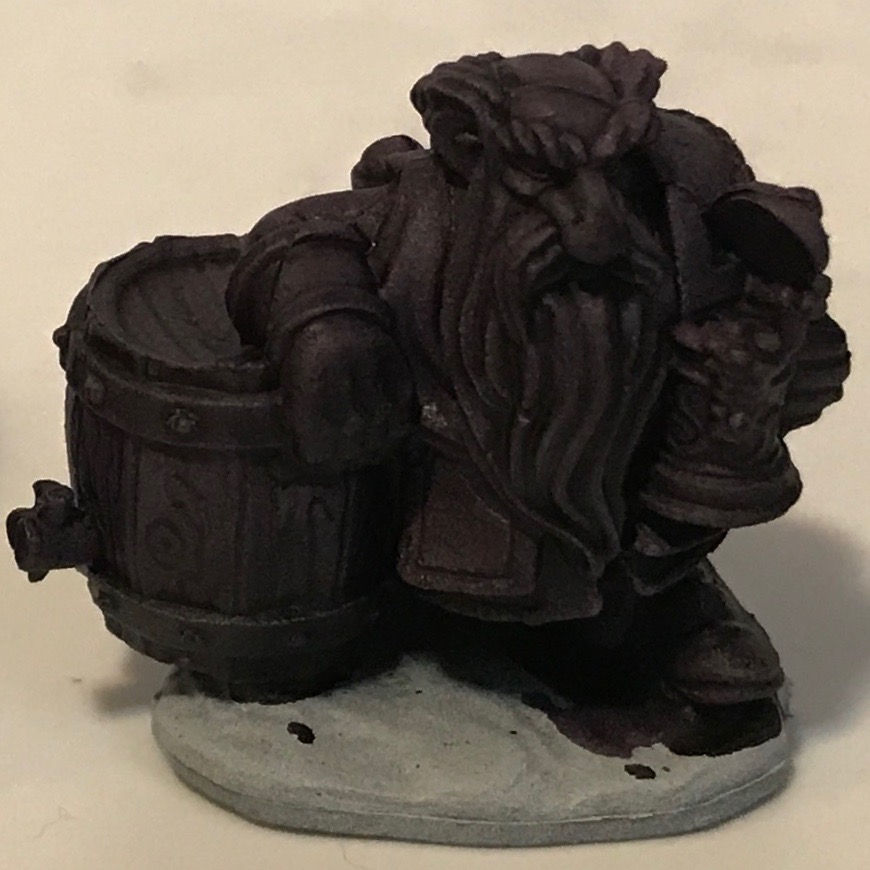 I’ve got reds, browns, and green a-plenty. However, I should consider getting a light blue and a light purple. Leviadon Blue and Shyish Purple are so dark that they’re almost black. It makes them hard to distinguish from each other.

Contrast paints are meant to be “slopped on” over a white primer. All of the above show the effect of applying contrast paint over zenithal priming. It was only after I took the photographs that I noticed that the paint did not get into all the nooks and crannies of the miniatures; the region under the cap of the Dwarf’s ale mug was particularly problematic. This is a result of my sloppy painting, but it also indicates which paint colors did not flow as smoothly and will requires more attention on future models.

The Metal Dwarf (aka metal zenithal)

All of the above tests and the ones described in my other miniatures posts are fine for applying sundrop to player pieces, miniatures of living creatures, or monsters. But what if I wanted to paint a figure to suggest metal armor?

I was inspired by this video to consider “metallic zenithal”. All the paints were applied with an airbrush. Although the Vallejo metal paints were supposed to be able to be directly applied with airbrush, I found I had to mix an equal amount of flow improver to keep the airbrush from clogging.

Here are the steps: 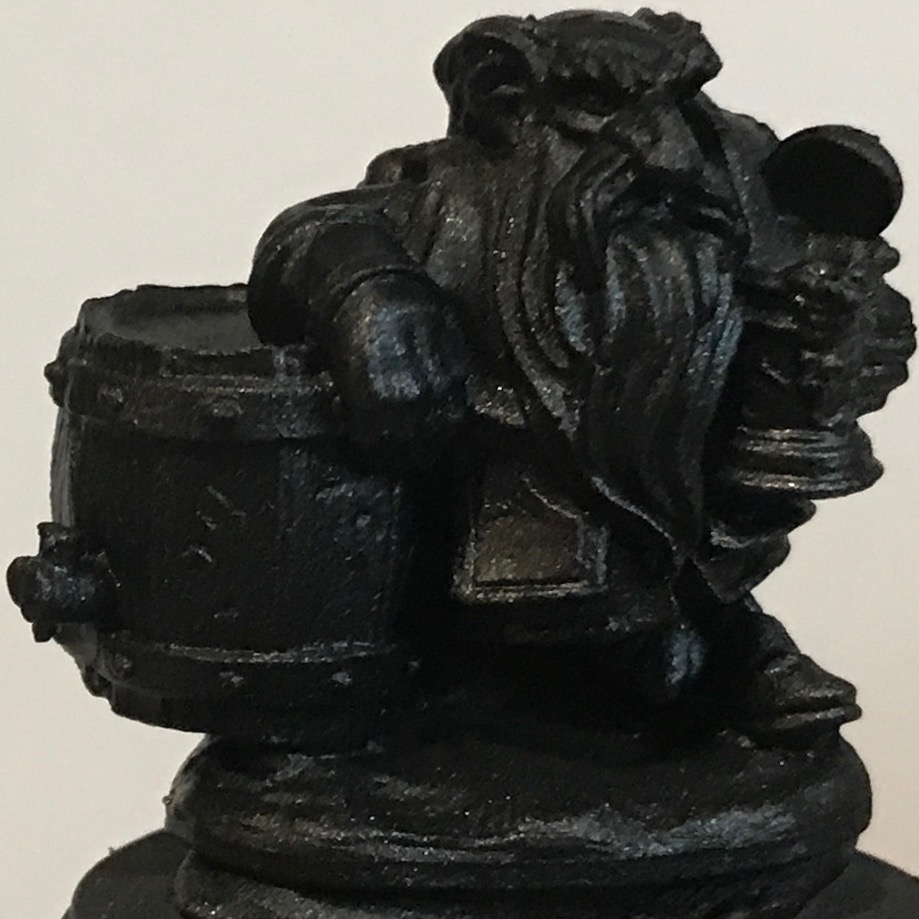 First, a coat of black primer.

Then a coat of Vallejo black metal paint. The above is a comparison between standard black primer and the metallic black.

Then a coat of Vallejo Chainmail Silver sprayed at a 45-degree angle. 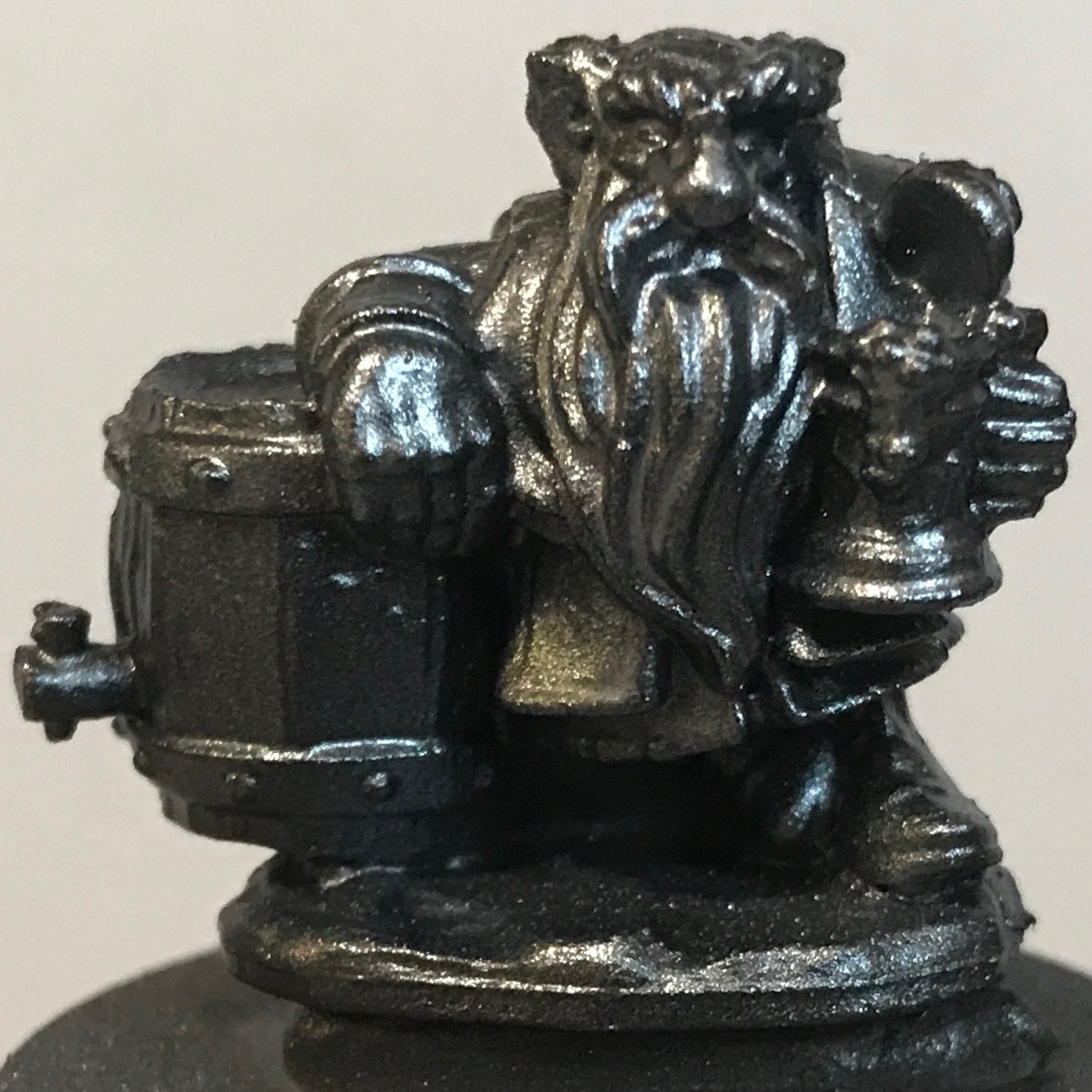 Finally a coat of Vallejo Plate Silver sprayed from directly above.

In the Vince Venturella video I linked above, he continues to refine the metal zenithal with additional shading and highlights. For my part, I’m content to stick with what I’ve got.

I may experiment with a gold metallic zenithal in the future, if I get a miniature for which gold metal looks appropriate.

My miniatures painting tools are packed away in a couple of boxes, waiting for me to make room in a closet somewhere to store them. The next time I anticipate painting minis is when Tainted Grail arrives.

Tainted Grail, the End of the Dwarves, Bugbear Warriors, and Colorshift