With a title like that, you may think this post will be fanfic. Sorry to disappoint you, but it’s another one of my miniature-figure painting posts. It’s long, as usual, but this time its length is due to lots of pictures. Yay, pictures!

In my first post on painting minis, I described how I looked forward to painting the large dragon sculpture that would come with the game Volfyirion. I received the game and started to think about how I’d paint the mini.

I’d forgotten that Mysthea and Volfyirion were not the only games I Kickstarted that had minis. In short order, I received my copies of the games Vindication and Edge of Darkness. (I also received Wingspan, Pandorum, and Human Punishment 2.0, but they didn’t contain any dull gray minis.) Suddenly I had more minis than I knew what to do with.

That’s a lie. I knew what to do with them: paint.

I’m going to describe the process, not in the order I did things, but in the order that I feel is the least to the most interesting.

This game has 42 minis. 40 of them are “armies” (sets of identical units), 10 per player. I decided it would be simplest to paint those in the game’s player colors: white, red, green, purple.

Vindication looks like a good game, though I haven’t played it yet. From a miniatures perspective, the game is disappointing in that the minis don’t really do anything. Only if you use an optional expansion module do they show up on the board.

From the design perspective, the minis look great:

As I discussed in my previous miniatures post, over the next year or so I anticipate using the Sundrop/pre-shading/sketch-style technique on the otherworldly minis of Etherfields and Tainted Grail. I chose to make the Vindication minis a test run of this approach. I painted them using the Sundrop technique with contrast paints, each mini with one bit (sometimes tiny) that was different from their main color.

I think the results came out fairly well:

I’m going to skip my usual practice of listing all the paints I used for these pictures. Instead, in a subsequent post I’m going to show Dwarf Brewers painted and labeled with all the Citadel Contrast Paints in my collection. I’ll only note there that I wish that Leviadon Blue (the mini with the yellow globe in the center) and Shyish Purple (circle with jagged spikes and silvery woman in the back) were not so dark that it’s hard to tell one color from the other.

I’m generally content with how these minis turned out. For comparison, Awaken Realms released a photo of the production line for Niamh, one of their Sundropped minis from Tainted Grail:

Awaken Realms has my respect for doing this good a job of mass-painting minis. However, I think I can do as well if not a little bit better on my own. For example, I can select the color of the contrast paint to better suit the miniature’s function or history in the game.

This mini proved to be a challenge. As you can see from the photo, it had lots of “fiddly bits” and sections of the sculpture that were hard to reach with a paint brush:

Most of the other pictures I’ve seen of the Volfyirion miniature painted by other artists used a dark color palette to match the game’s artwork. I decided I wanted a fire dragon. That meant I’d be using mostly warm colors. So the first step was relatively easy: use an airbrush to apply a tan zenithal.

Next comes color choices and painting. I chose to stick with contrast paints where I could. I decided I wanted to accentuate the difference between the dragon’s top and underbelly by painting them two different colors, Citadel Blood Angels Red and Citadel Wyldwood. For fiery highlights I went with Candlelight Yellow and Orange Fire.

Spider claws are unusual for a dragon, much less a fire dragon, so I decided to portray them as exposed bone with Skeleton Horde. In Mysthea lore, the crystals the dragon crouches on are called Qoam, so I used the same color scheme as I had when I painted the Qoam crystals of the Mysthea miniatures: Vallejo Red with a wash of Citadel Shade Carroburg Crimson.

It was tricky getting around the nooks and crannies of the mini. Fortunately the brushes I had were good enough for the task, especially the smallest ones. 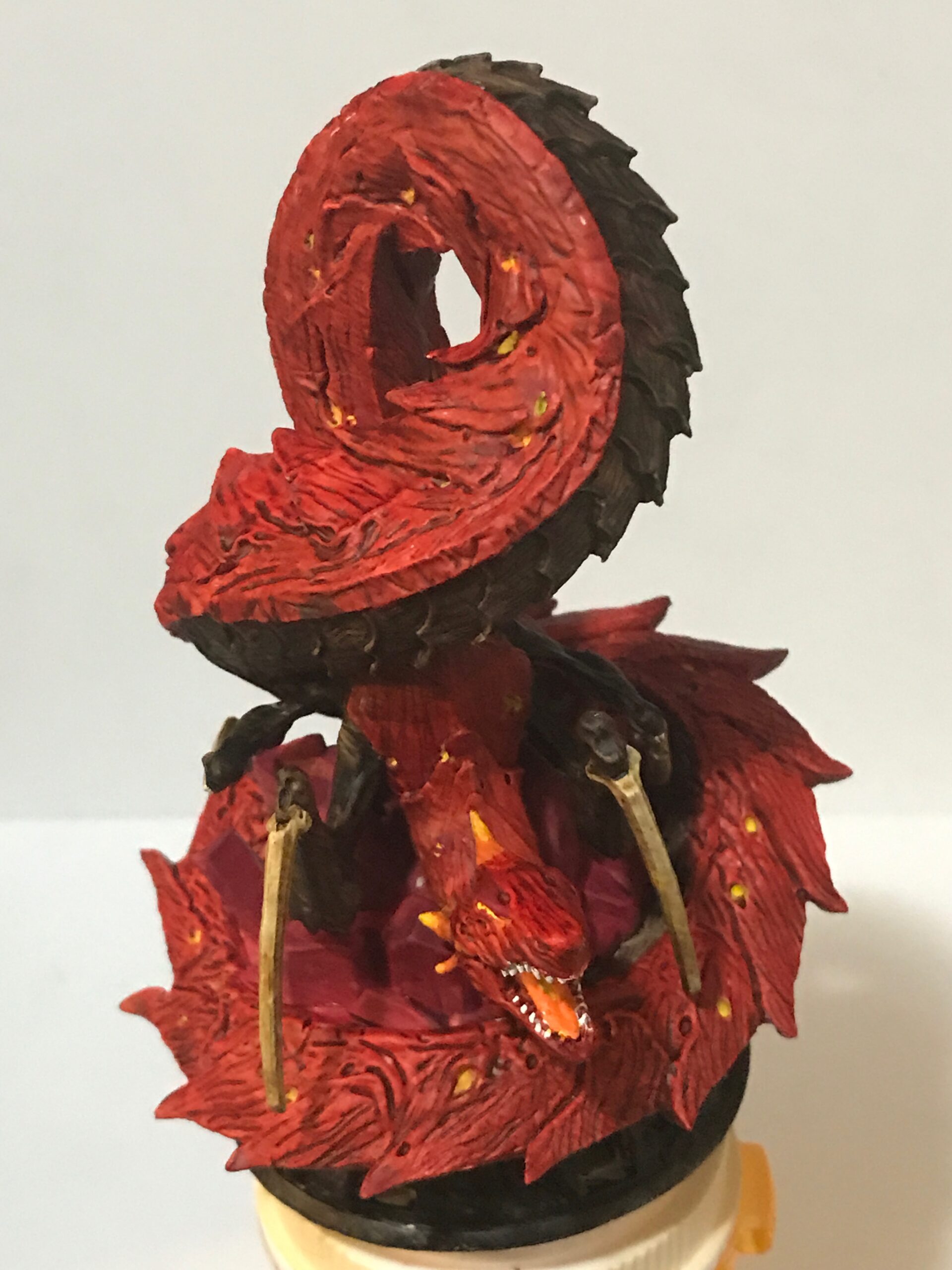 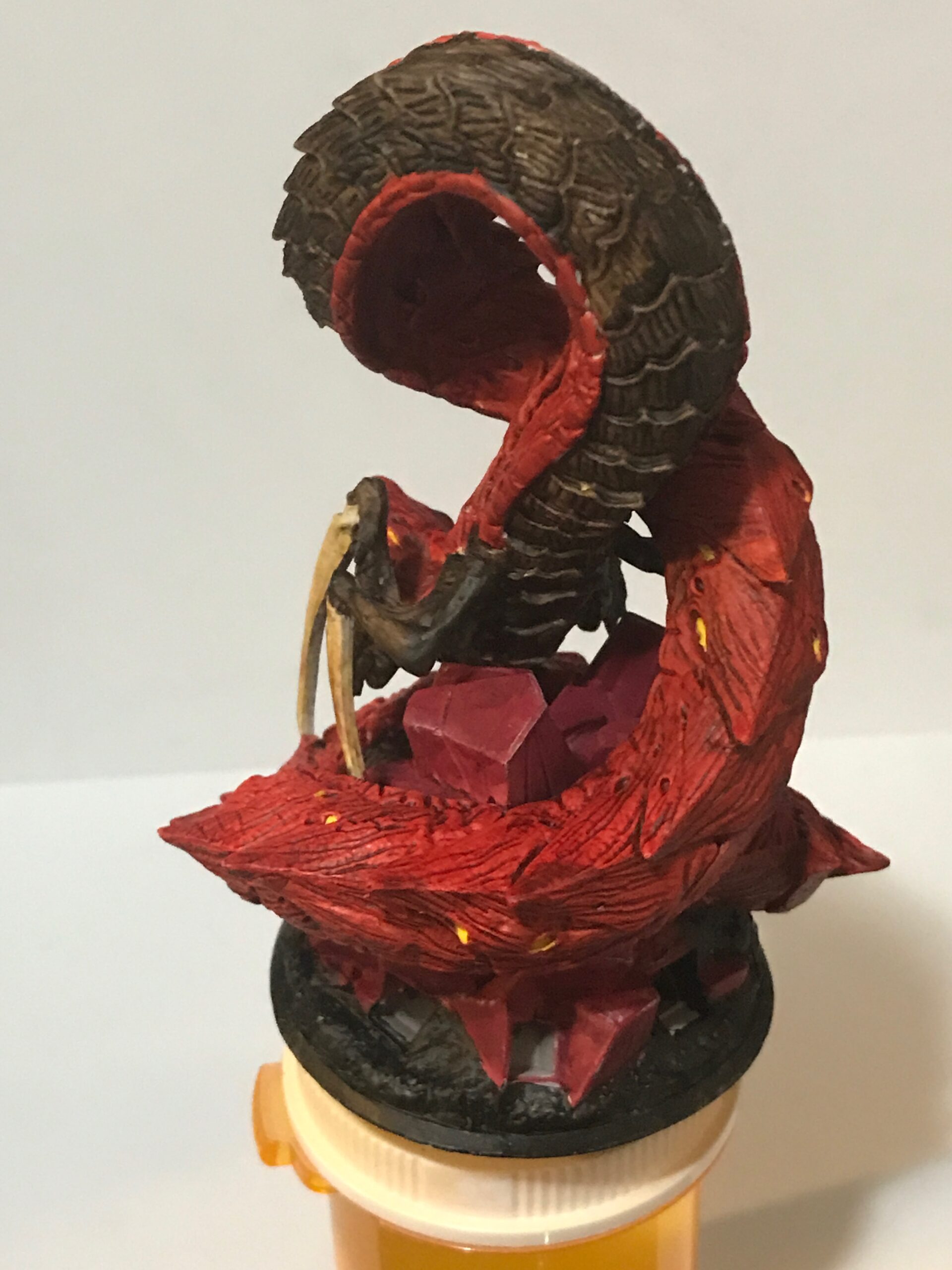 It looked pretty decent. However, I thought the contrast between the red top and the brown underbelly was too stark. I took a risk and lightened the underbelly with a drybrush of gold. The result was better than I hoped. Here’s how it looked after varnishing. 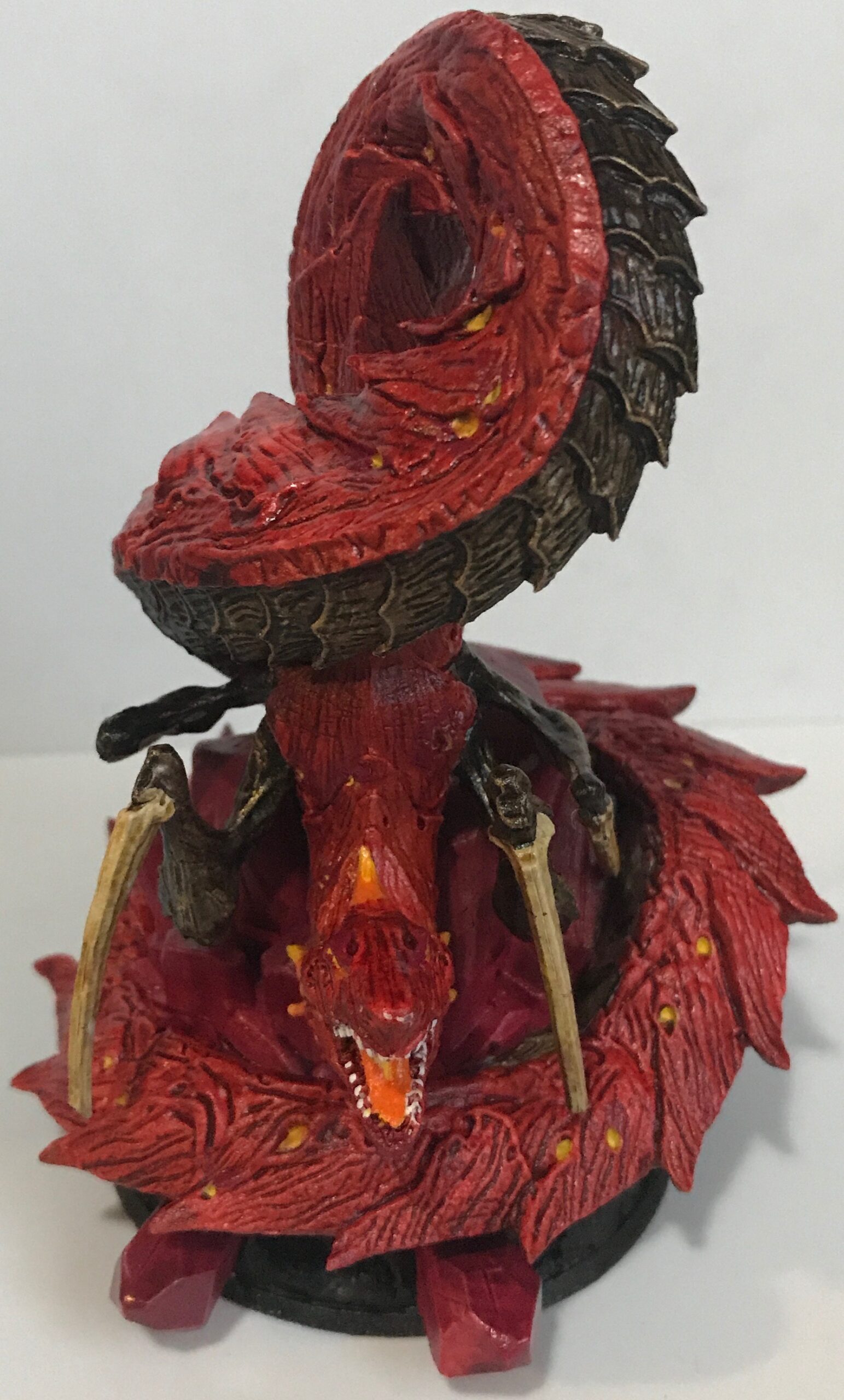 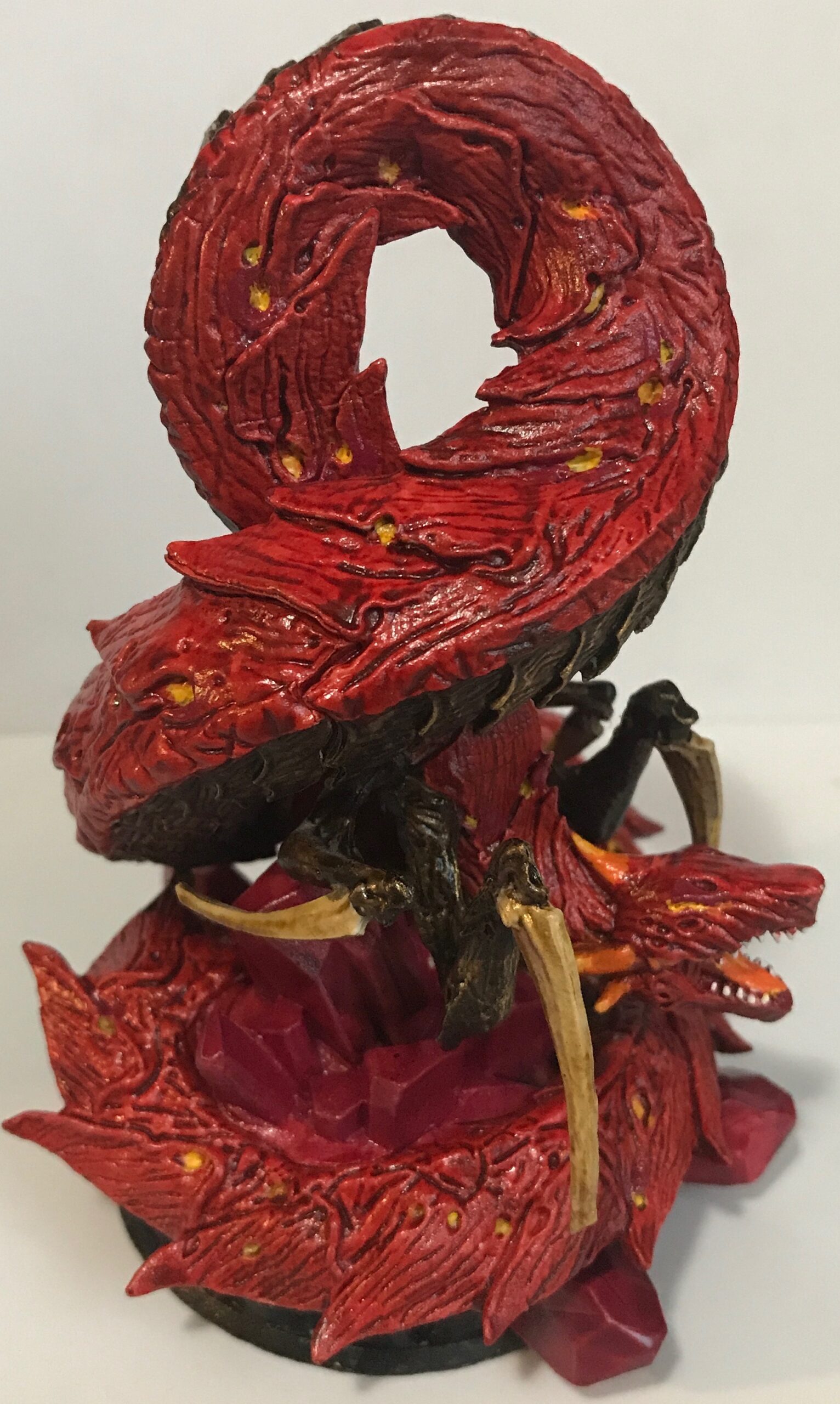 The web reviews I saw on Citadel Contrast Paints said they did not adhere very well. My own experience confirm that statement. Even the mildest mini-on-plastic rubbing could cause the contrast paint to chip.

The sites recommended 3-4 coats of varnish. That sounded good, but I also found contradictory information on the web about how long I should each coat dry; a web search on the question tends to give links to varnishing boats. My spray can for Liquitex Satin Varnish either did not include drying time or the text was too small for me to find.

I compromised: One quick spray, rotate 90°, spray again; repeat two more times for 360° coverage. A half hour later, do the same thing but starting with a 45° offset so I was spraying on the diagonals. Repeat the whole process the next day.

So far, no chipping. We’ll see what happens.

I’ve got a couple more miniature-painting posts in my mental queue, discussing some more tests I did.

Physically, I’m wrapping up painting for now and putting the airbrush and paints away. I anticipate I might paint more minis in October 2019, when Tainted Grail is tentatively scheduled to arrive.