I’ve been playing a lot with 3D lately, even though I have no depth perception.

It started when I saw a Kickstarter for an inexpensive 3D printer. A 3D printer for less than half the cost of my first laser printer? I could not resist.

I know that this printer can’t produce high-quality models. I anticipate using it to prototype models before sending them off to a professional firm. Also, now that I’ve got lots of board games, I never have to worry about losing a game piece again; I’ll just print out a new one.

Researching the specs and possibilities of having my own 3D printer led me to Thingiverse, a web site of models that you can print on your own 3D printer, and to Shapeways, a service for printing out models on high-end 3D printers.

I knew that the 3D printer revolution was coming, but I was not aware of how far the technology and services had advanced. You can model something in a 3D program on your home computer, and turn that idea into reality. Even if you don’t have a 3D program or much design skill, sites like Shapeways offer a design-your-own-ring page that does most of the hard work for you.

I tried my hand at creating a few rings with standard magical symbols (pentacle rings, etc.). You can see the results at a special “shop” I set up on the Shapeways site. The thumbnail previews don’t show much; click on the image, then click on the cube to see a model you can rotate by clicking and dragging. (Even if you want one of my designs, I suggest you don’t order it from that shop unless you happen to want a size 12 ring. Contact me and I’ll create a ring in the size and material you want.)

The future arrived while I wasn’t watching!

In order to take advantage of this new technology, I have to learn how to use a 3D design program. I have no illusions about my artistic and designing skills; I’ll be able to create objects that are workmanlike, and that’s it. But sometimes “workmanlike” is good enough; I’m not a writer, but I know enough about computers to write a blog with one.

So I purchased an inexpensive 3D program: Cheetah3D. It contains all the features I’m likely to need for the kinds of models that are within my skill to design and within the resolution of my 3D printer to produce. I had the program; after working through a couple of tutorials, what should be my first project?

My thoughts turned to the logo for my Wiccan group, Acorn Garden. That logo got its start with a picture drawn on a postcard for me by Melissa Arleth in, I think, 2006. 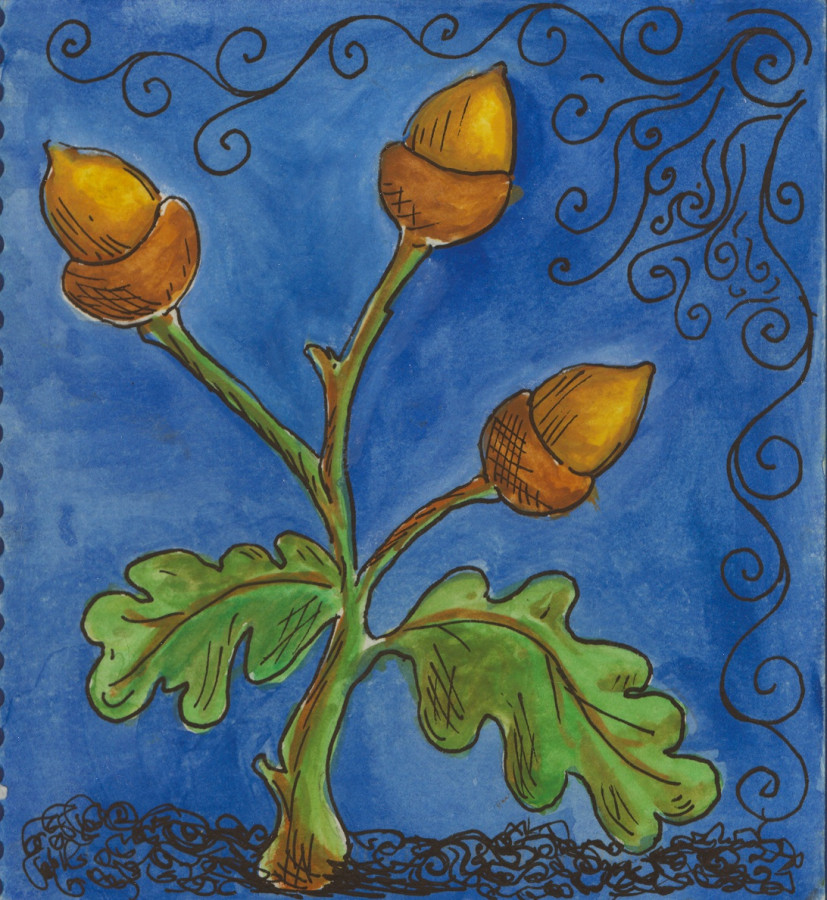 In 2009 I decided I wanted to have an Acorn Garden symbol for a tattoo. Melissa’s artwork was far more complex than I think I could stand to have inked on me, so I asked Vann Godfrey to translate Melissa’s picture into a logo suitable for a tattoo.

This logo became a tattoo. It also found its way onto pens, tote bags, t-shirts, and most recently a custom-sculpted ring.

Here’s the latest phase of evolution of the Acorn Garden logo: I turned it into a 3D model and created a tiny movie using Cheetah3D.

Now that I have a 3D model, what will the next phase be? A necklace? A sculpture? An animated cartoon in which the Acorn Garden logo and the Hermes Council logo team up to fight Mecha-Godzilla? I don’t know. The nice thing about the future is that the possibilities are wide open.

Investing in our future