Once every two years, the Particle Data Group at Lawrence Berkeley National Laboratories publishes their Review of Particle Physics. This is both a web site and thick magazine, about the size of the New York telephone directory. The production issues associated with such a volume are so complex that, even though it’s only published biennially, publication is distributed among several physics journal publishers; in 2010 it was published by Journal of Physics; this year it was published by Physical Review D.

In other words, it’s a big deal.

What’s in it? Tables, articles, plots of interest to particle physicists. When I get an issue, I bookmark certain pages that have proved a valuable reference over and over again; for example, their tables of material properties. (For those of you know what it is: the CRC Handbook does not include the electromagnetic and nuclear radiation lengths of different materials.) By far the biggest section are the particle listings: every particle, every property, every resonance, every exotic spin state that has ever been observed is included.

In 2000, Michael Shaevitz (my boss) and I worked to produce a plot that appeared in the Review. He made all the scientific choices: what experiments to present, what information should appear in the plot. I handled the technical details: formatting the plot, selecting the markers for the different experiments, occasionally correcting the data for some minor issue. Over the past ten years, we continued to revise the plot as new data came in.

Want to see it? Here it is: 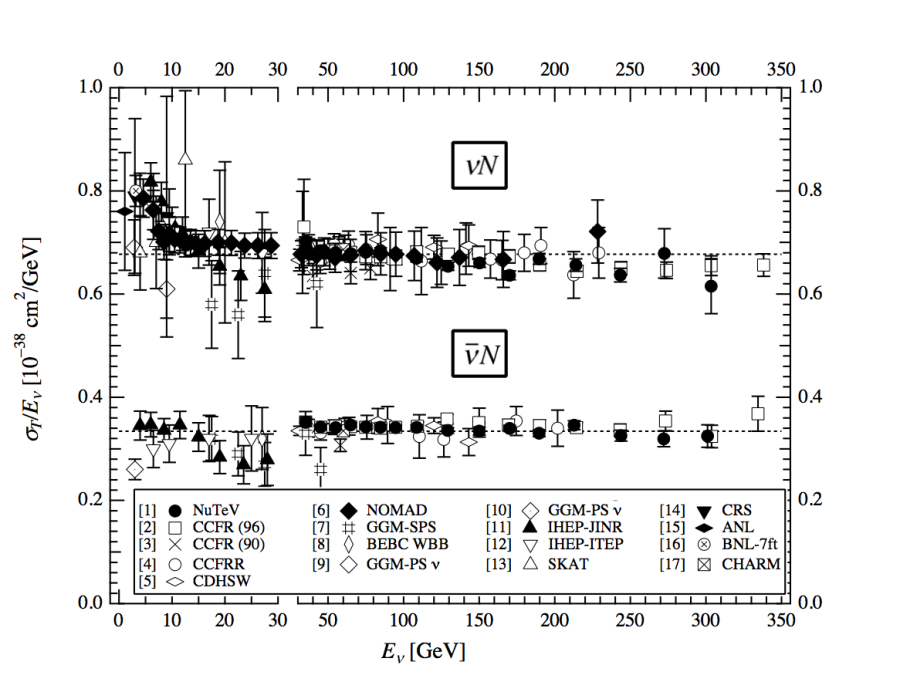 If you want to see it in context, with captions and references, it’s here as it appeared in 2010; go to page 9.

From time to time, Mike would suggest new data to add to the plot, or we’d receive a request from an experiment to add their data. We recently received such a request, and a couple of days ago the two of us were discussing different ways of displaying all the new data on the plot.

That evening, I get home and find the 2012 edition of the Review has arrived. I open it to our plot… and found this instead. Our plot had been replaced by an article written by G.P. Zeller.

We both know G.P. “Sam” Zeller. She’s worked in neutrino physics for over fourteen years. Given her broad background in neutrino experiments, she was a great choice to be asked by the Review to write about neutrino cross-sections. Her article is both excellent, and reflects an increased interest in neutrino physics within the particle physics community. This represents nothing but good for the field.

Still, for me personally, it represents one less professional link to the physics community. I have few regrets; I made my career decisions long ago, and I’m content with how things turned out. Even so, it was nice to look at the long author list at the front of the Review and see my name there.

Wait a second. Did you click on that link and look for my name? It’s still there!

This is almost certainly an editing error. I’m sure by the time of the 2014 Review my name will be removed. I’ll take the gift anyway: For another two years, I can bask in the completely-undeserved reputation that I’ve contributed something worthwhile to the Review of Particle Properties.

Clearing a path to the graves

The Colors of the Qabalah