I’ve performed seven weddings so far. My rate for starting successful marriages is: Three couples are still together, two marriages ended because one of the partners passed on, and two divorces. That’s roughly the national average. Note that, in order to maintain my average, Deborah Lipp is forbidden to die.

I’m far from the only Wiccan to use the ULC as a religious organization for performing weddings. Pagans and Wiccans have been doing this for decades. Isaac Bonewits joined the ULC in the 60s.

This has been a matter of necessity, rather than a matter of choice. The resources for jumping through the hoops to get legal recognition for a religious organization are beyond the means of most pagans, especially since many pagan groups (including Wiccans) are “living-room worshipers” with few members in the “congregation.”

I happened to mention this to Oberon Zell-Ravenheart, a major figure in the Neopagan religious movement. He was not sympathetic about the difficulties in obtaining ordination in a legally-recognized religious group. He pointed out that everyone knows what the ULC is. He asked me if I thought that ULC religious credentials proved that you were qualified to offer spiritual and religious guidance. I told him the truth: no, no one does. The current qualification for being ordained by the ULC is to hit a button on their web site.

He asked me where I thought my spiritual and religious qualifications came from. I thought a moment. I answered that I’d spent years offering spiritual instruction as a teacher of my Wiccan group, Acorn Garden, and in Hermes Council. As part of my religious training I had to do service offering help and outreach, and I’d chosen the Bergen County Rape Crisis Center; I did volunteer work for them for two years.

He then asked, if I felt that these qualified me to represent myself publicly as an officer in a religion, why don’t I get myself ordained by a recognized religion instead of what’s widely regarded as a tax dodge? Why not be serious about my religious credentials? Why not prove that I’m capable of pastoral counseling?

I answered that I didn’t know how to go about doing this. He pointed out two pagan organizations that offer serious ordination: the Covenant of the Goddess (CoG) and the Church of All Worlds (CAW).

Oberon was right, of course. I looked into both groups. The basic requirement for joining CoG is be vouched for by two existing CoG members. I don’t know anyone from CoG in my general circle of pagan friends.

CAW has just resurrected itself after being dormant for a few years. I looked at their web site, and while there is a path to ordination, it appears that part of the process is that I’d have to identify my Wiccan group Acorn Garden as a CAW Nest. I’m not prepared to go that far. Probably it’s just pride; it’s not as if there’s an important practical different between the theologies of Wicca and CAW, and even their religious practices would seem almost the same to someone who wasn’t a pagan.

That raises an issue that I did not discuss with Oberon: with either CoG or CAW, I’d be working to get ordained by their institution, only to drop the association as soon as I had the ordination certificate in my hot little hands to run off and practice Gardnerian Wicca. That seems disingenuous to me. I’d be using them to achieve a legal goal, instead of what the ordination’s purpose is supposed to be: a commitment to provide counseling within the context of that tradition.

At this point, getting myself seriously ordained is on my bucket list, but it’s not high on my list of priorities. I don’t see a path that allows me to do this and still be truthful and honest to both myself and the organization that’s granting me the ordination.

Now I’m going to set aside the “serious” part: Why did I title this post “The Three Doctors”?

When you join the ULC, you are permitted to designate yourself with any title you feel is appropriate: Minister, Reverend, Holiness, etc. I picked “Doctor.”

Of course, I already have a Ph.D. in particle physics (awarded by a respected and accredited institution, Columbia University, which goes back to what Oberon said; sigh). I was already Doctor Seligman, though I don’t normally use that honorific. Combining the ordination with my scholarly credentials made me Doctor Doctor Seligman.

I apologized to them for what had happened, but they didn’t blame me. They pointed out that if they’d been Baptists, “Doctor” would have appeared on the license anyway. The problem was the clerk’s ignorance, not my choice of title.

As I’ve said, serious ordination eludes me. But non-serious ones are still available: 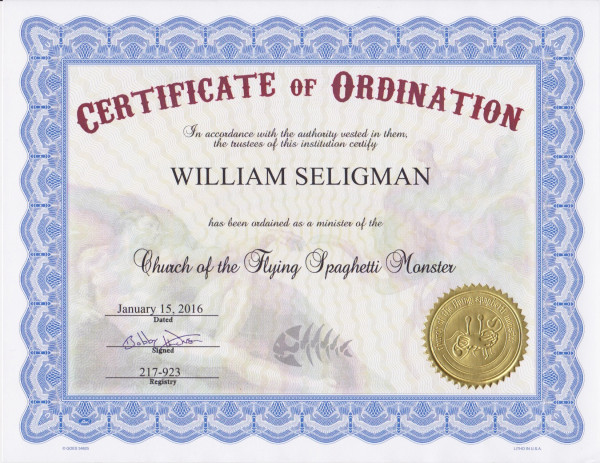 Again, I can choose my title as an ordained member of this religion. Again, I choose the title “Doctor.” I am therefore:

Please just call me Bill. There is no need to bow.

The end of a project

Gloomhaven: Jaws of the Lion