In which exploring a labyrinth leads me on a path to both nowhere and enlightment.

When I was spreading the word about Kickin’ Wiccan on Facebook, Eve Jones made a suggestion: could I design jewelry incorporating the design of the labyrinth at the Cathedral of Chartres? 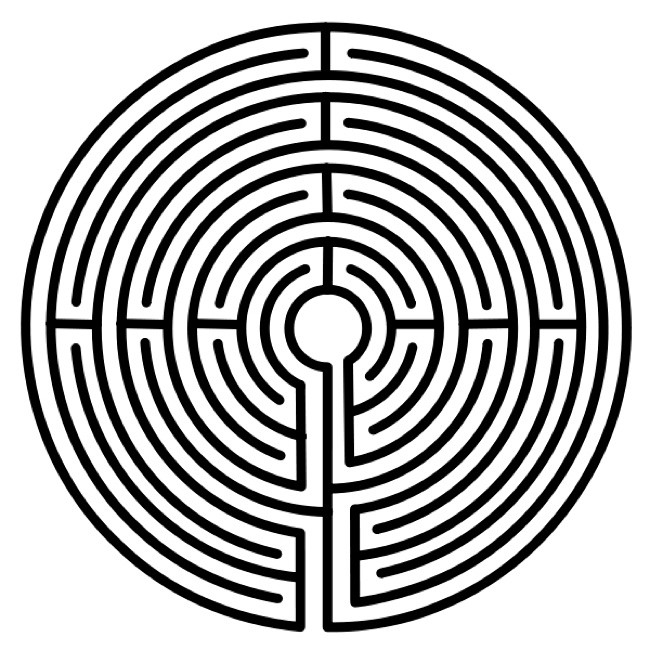 This is an intriguing idea. I’d pretty much reached the limit of what I could do with pentagrams and pentacles and whatnot. The labyrinth is an interesting pattern, and it seemed like it would make attractive jewelry. My first attempt was to simply engrave the design on a pair of earrings: 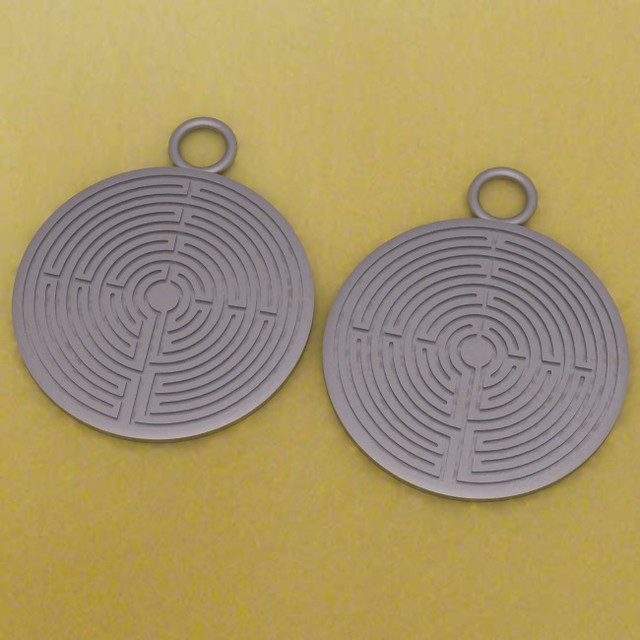 These are OK, but they don’t seem to take advantage of what’s possible in 3D design. As a measure of how lackluster they seem, no one has ordered these earrings from their Kickin’ Wiccan page even though they’ve been on display for more than six months. I realized I wanted something that looked more like this digital render from my 3D design program: 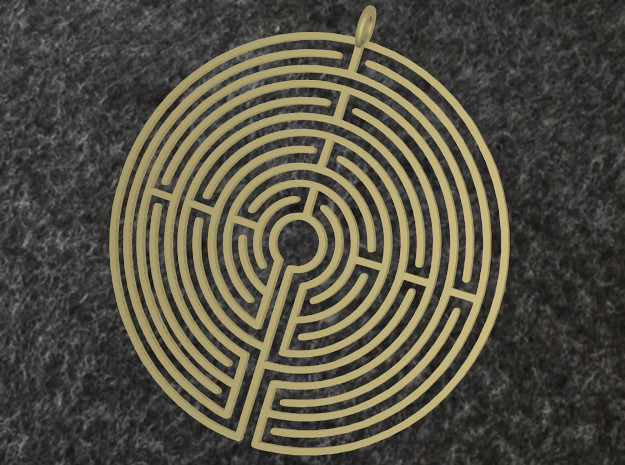 That had the “wow” factor I was looking for. The next step was to get Shapeways to print it. I submitted the model to be printed in raw brass, the material I normally use for my first samples. The issue was that the Shapeways engineers would always reject the model for printing. I’d get back diagrams like this one: 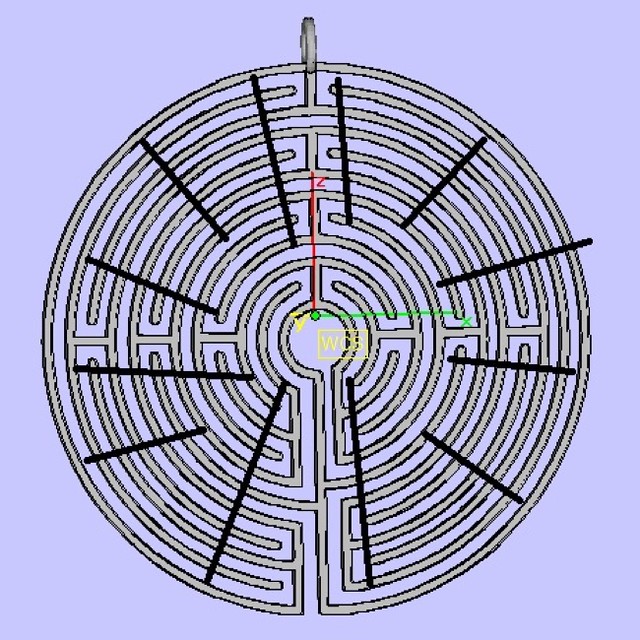 It took me a while to understand what the diagram meant. I finally got it after reading Shapeways’ description of how they print in metals several times: To make jewelry in raw brass, first they print it in wax. Then they pour plaster around the wax, heat the mold until the wax melts, then pour liquid metal into the mold (exactly how regular metal jewelry is made). For complex designs like the labyrinth, they have to add extra channels for the metal to flow to all the areas of the mold. Then after the metals cools, they remove the extra channels and polish off any marks.

What the engineers were trying to tell me is that the labyrinth was too delicate a design for this process. The main part of the jewelry would snap when the channels were clipped off. (As we shall see below, the engineers were right.) I tried various adjustments (making the lines the thicker, making the pendant larger) but all the labyrinth designs in raw brass were rejected.

On to the next step: Try to print the pendant in stainless steel. The stainless-steel printing process is different from that of the other metals: The design is printed in steel powder held together by some kind of binding liquid. Then they place the soft model, which has the consistency of wet sand, into a kiln and infuse it with bronze, making the model strong and solid.

The result? They tried three times, and each time the model broke before it could be heated in the kiln.

That left plastic. I wasn’t anxious to add plastic jewelry to my shop. I wrote a blog post on why I wanted no more plastic on Kickin’ Wiccan. However, if that were the only way to get the pendant printed, I could at least take a look at it in plastic and then decide if the pendant could be placed alongside the metal jewelry. This was the result, in purple, polished strong and flexible. 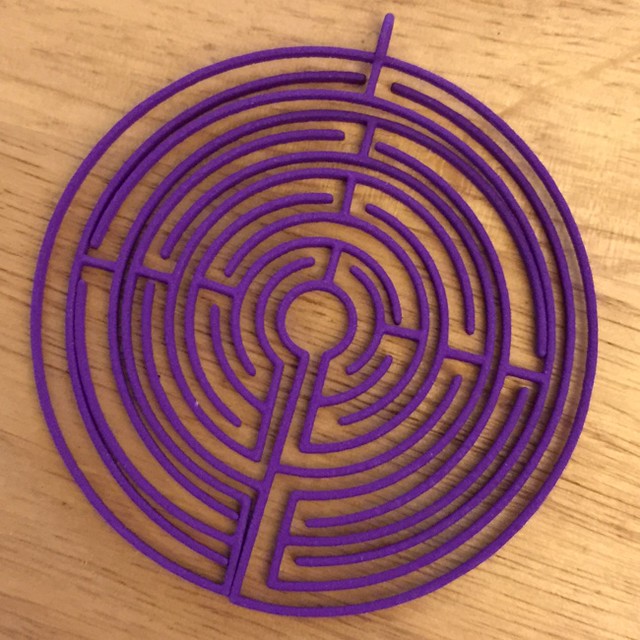 It looks almost OK, doesn’t it? But that’s after I spent five minutes getting every little bit into position. Here’s what it looks like if I just pick it up and put it down once: 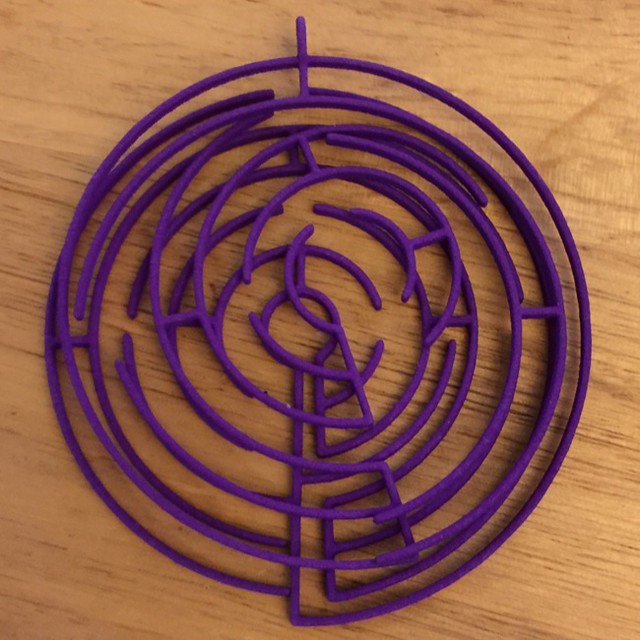 Here it is if I hold it in mid-air: 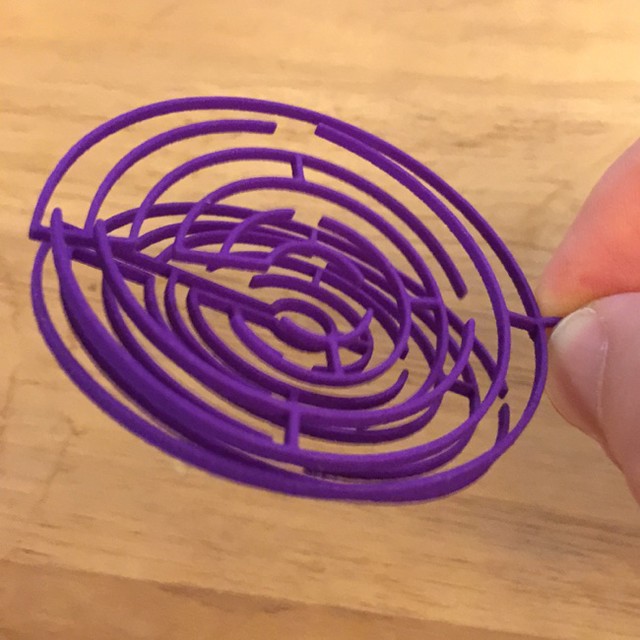 The Shapeways engineers had spotted what I did not: The labyrinth design make look like it’s well-connected, but it’s not. It was meant to be walked, not sculpted. There are large sections which are not strongly connected to other portions of the pattern. Here I’ve highlighted a couple of “branches” which are only connected to the rest of the labyrinth by a single “stem”: 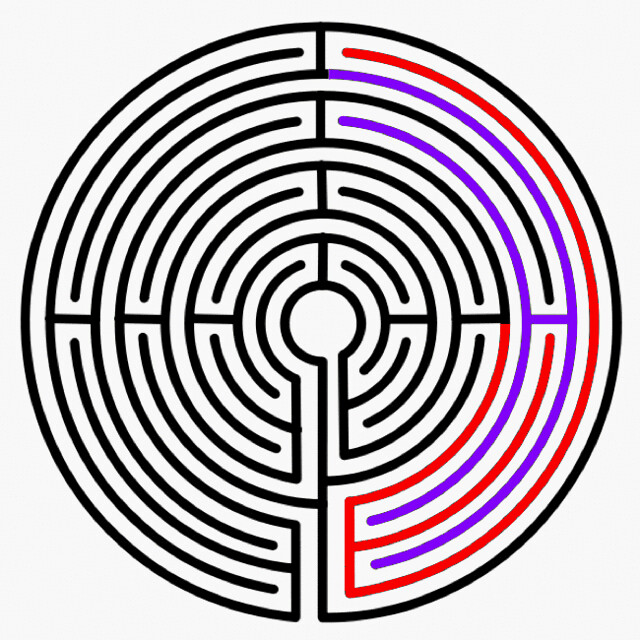 When I look at the Shapeways site, I see that no one else has managed to make this labyrinth design as a free-standing model.

I think it’s still possible to make this design work in plastic, if I were to make the walls twice as thick and leave the smallest possible gap between them. Given the time it would take, and my reluctance to introduce plastic jewelry into my shop, I don’t think it’s worth the effort.

I can still engrave or emboss the labyrinth on a flat surface, if I can think of a way to make the result more intriguing. For now, I accept that at the center of this labyrinth was a greater understanding of the Shapeways’ printing process and the insight of their engineers.

Who knows? Shapeways is continually working on their 3D printing methods. Maybe my labyrinth pendant will be possible in the future.

The Ren Faire and me: Divination, part 2